href=”http://www.sony.com/” rel=”homepage” target=”_blank” title=”Sony”>Sony announced late last that its first two Android tablets, the mostly conventional S and the hinged split-screen P, would be getting an official Ice Cream Sandwich update. Of course, a promise without a timeframe rings somewhat hollow. TechRadar reports that Sony announced that both models will be updated “this spring”, speaking to the press at a London event. The company spokesman also let loose about some exciting new functionality, including href=”http://office.microsoft.com/en-us/default.aspx” rel=”homepage” target=”_blank” title=”Microsoft Office”>Microsoft Office and PlayStation 3 controller compatibility. 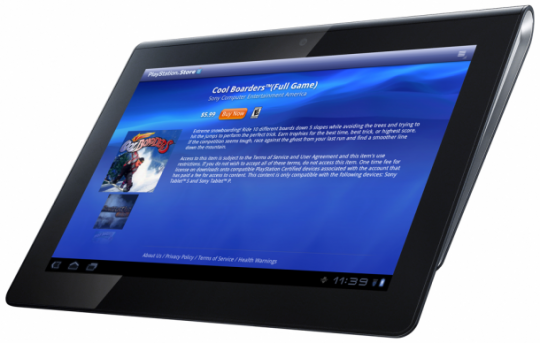 The former honestly isn’t that big of a deal – anyone who really needs Office support has already shelled out for one of the many document managers already available in the Android Market. But using Sony’s PS3 SIXAXIS and/or Dual Shock 3 controller in conjunction with tablets that are href=”http://uk.playstation.com/playstationsuite” rel=”homepage” target=”_blank” title=”PlayStation Suite”>PlayStation certified is an exciting prospect indeed. After the update, you could ditch the on-screen controls and play classic PSX titles like they’re meant to be played – not to mention play new games with physical controls. Previous attempts to use href=”http://www.jp.playstation.com/” rel=”homepage” target=”_blank” title=”PlayStation”>PlayStation controllers on Android hardware have met with little success, but the controller support baked into Ice Cream Sandwich has likely changed the equation.

We can assume that the declaration only technically applies to tablets in the UK, especially since the Tablet P still isn’t available from US retailers. (They were more than happy to show it off at CES in Las Vegas earlier this month.) That said, WiFi tablets usually get a pretty universal update, and with a minimal language barrier US href=”http://discover.store.sony.com/tablet” rel=”homepage” target=”_blank” title=”Sony Tablet”>Tablet S owners can expect to see Ice Cream Sandwich gracing their hardware soon. Hopefully we’ll see the Office and PlayStation features trickle down to Sony Ericsson’s XPERIA phones as they get updated.