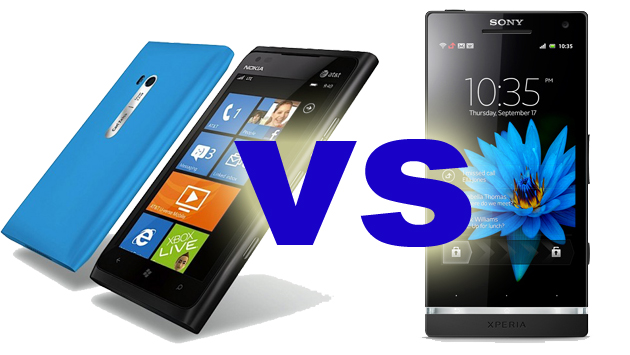 Two of the most talked about phones to be shown-off at this year’s CES in Las Vegas are href=”http://nokia.com/” rel=”homepage” target=”_blank” title=”Nokia”>Nokia’s Lumia 900 and href=”http://www.sony.com/” rel=”homepage” target=”_blank” title=”Sony”>Sony’s Xperia S, and it’s easy to see why as both devices seem to have everything the modern consumer could ask for.

In order to see which of these upcoming smartphones merits the most excitement we’ve decided to let them duke it out.

Sony’s first major release since dropping Ericsson sees the introduction of dual-core architecture in the form of a 1.5GHz dual-core CPU, which should chuck out more than enough power to have the Xperia S humming along nicely.

The device also benefits from Adreno 220 graphics, 1GB RAM and either 16 or 32GB of on-board storage space, but there’s no space for micro SD expansion in the device.

Nokia’s Lumia 900 carries on the tradition set be the previous two iterations of the line, which is to fit the phones with a single-core CPU with the clock speed ratcheted up to give the device the poke it needs.

The Lumia 900’s CPU runs at 1.4GHz, and the device also offers 512MB RAM and 16GB of storage but, again, fails to offer expandable memory, so once you run out of gigabytes, you’re out of luck, unless you take advantage of href=”http://skydrive.live.com/” rel=”homepage” target=”_blank” title=”Windows Live SkyDrive”>SkyDrive’s 25GB of free cloud-based storage, that is.

Nokia’s Lumia 900 features a 4.3-inch AMOLED touchscreen that operates at a resolution of 480×800 pixels and has a pixel density of 217ppi, which is hardly remarkable by anyone’s standards.

Sony’s Xperia S is much more the ticket with a 4.3-inch LED-backlit LCD screen operating at 720×1280 and with its pixel density of 342PPI, it’s better than Apple’s Retina Display-toting href=”http://www.apple.com/iphone” rel=”homepage” target=”_blank” title=”iPhone”>iPhone 4S.

As if that wasn’t enough to get the tech-heads drooling, the Xperia S also benefits from Sony’s Mobile BRAVIA Engine, which tweaks the visuals to get even more from the screen!

Sony’s Xperia S is a neat looking device which is odds-on to win the award for the world’s weirdest antenna design, which takes the form of a translucent strip running along the bottom of the device.

Aside from its antennae based quirks it’s pretty standard fare with a nice, slim chassis, touch sensitive controls and nice, symmetrical camera layout on the rear of the device.

Nokia’s Lumia 900 is also easy on the eye. The phone is, like it’s brothers, crafted from a single block of polycarbonate that takes the form of a more mature iteration of the Nokia N8, which itself was an aesthetically pleasing device.

As with the Xperia S, the Lumia 900 features touch sensitive controls on the face of the device and the layout on the rear is uncluttered and functional.

The Lumia series of devices has really seen Nokia up its game in terms of design, and we’re pleased to see the Lumia 900 continue the trend. Long may it continue.

The Nokia Lumia 900 is a Windows Phone 7.5 device, so don’t expect anything new or cutting edge from the software. It’s the same functional, eminently usable platform that has been winning Microsoft a lot of new admirers of late.

Version 7.5 or ‘Mango’ does have some solid improvements over the first release of the platform, such as threaded messaging, improved Live tiles and multitasking.

But don’t expect complication, Windows Phone 7.5 is as simple as things get and this, we feel, is a real plus point.

Sony’s Xperia S runs on version 2.3.4 of Google’s Android OS, otherwise known as Gingerbread. Why Sony chose to repeat the mistakes made with previous Xperia’s and outfit the phone with an ageing version of the operating system is anyone’s guess – personally we’d have liked to see some Ice Cream Sandwich action.

Gripes aside the device runs well on the operating system. It’s fast and smooth thanks to the Xperia S’ cutting edge hardware and is customisable and powerful in the right hands.

Sitting atop the Gingerbread foundation is Sony’s TimeScape UI, which adds widgets, social networking functionality and other visual tweaks to the package.

Both operating system’s have tons of apps available too, with Microsoft’s Windows Phone Marketplace offering 50,000+ and Google’s Android Market rapidly catching up to iOS, offering over 400,000.

The Xperia S features a 12-megapixel primary camera and the Exmor-R sensor is a tremendous asset to the device, capturing high quality images in quick-time.

On the front of the Xperia S you’ll find a 1.3-megapixel camera for all your video telephony needs, which can record in 720P.

The device can capture video in 720P and also offers a 1-megapixel secondary camera for video-calling and the like.

The Xperia S is attractive, powerful and has the kind of screen that will keep you watching your media until your eyes bleed.

Nokia’s Lumia 900 is a nice enough device, but when you take a look at how the company’s competitors are upping their game it isn’t too much of stretch to see that the Finns are going to have to do the same if they want to share a slice of the premium smartphone market.