GoAndroid
Home Old Your Verizon Data Should Be Up and Running Now
Verizon experienced another data outage yesterday and it was a lengthy one – half a day, give or take a half an hour. On their Twitter account, Verizon said that 3G was unaffected even though users had trouble connecting to the 3G network even when switching to CDMA-only mode. 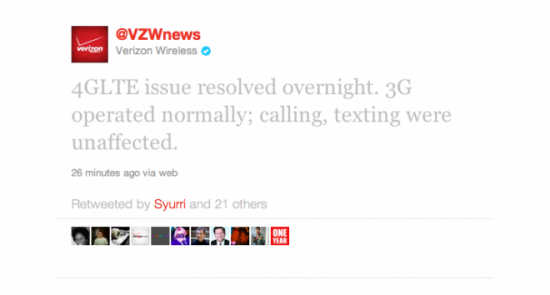 They claimed the same thing during last week’s outage when 3G was, in fact, affected for 4G device users. 3G-only device users didn’t see any outages but that’s because their phones use a different authentication service to get onto the network. For 4G users, they use an entirely separate service for both 3G and 4G and many were without data at all (1xRTT included for most).
We’re not sure what’s been going on with Verizon’s “fast and most reliable” network as of late but we hope they’ll be taking a look at this month’s outages and work on preventing them in the future. We know they’re bound to happen but it’s quite troubling when outages happen this frequently. Long story short: all is well and you can go back to drinking up that fast LTE juice. [via VZBuzz, thanks to everyone who sent this in!]