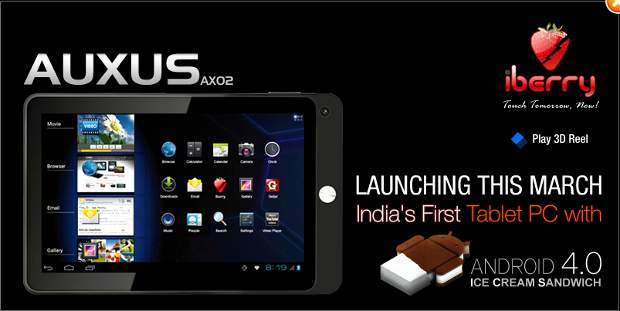 India Based company iBerry will launch its first Google Ice Cream Sandwich tablet for the Indian audience in the coming month. According to info iBerry India spokesperson Musthafa Kamal informed that “iBerry India is getting ready for the launch of its first Google Ice Cream Sandwich based tablet, which will take place in the month of March. This will also be the cheapest ICS based tablet with a price tag of about Rs 10,000 (200$).”

There are two existing models also, the BT07 7 inch version and the BT10 10 inch tablet, which were launched last year during September.

The 7 inch iBerry Auxus AX02 will have a 1 GHz processor with dedicated graphics engine for speed and better graphic capabilities as well. Along with that the Auxus will feature 1 GB of DDR2 RAM, HDMI output and support for a 3G USB modem. The 7 inch display will have 800 x 480 pixel resolution and a capacitive touch based input system with multitouch for pinch to zoom functionality. For better gaming support it will have a gyro based motion sensor.

The device will be based on Android 4.0 (Ice Cream Sandwich) operating system and will be capable of handling up to 32 GB of expandable memory via microSD cards. Also the device will get mini USB on the go port support for pen drives and other peripherals.

iBerry is all set to launch the device countrywide in the next month. Auxus AX02 will be available through the online retail network and retail sale partners in various cities across India. With one year Warranty