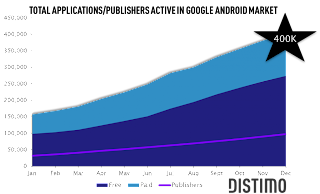 Yes, now there are more than 400,000 applications in the href=”http://www.android.com/market/” rel=”homepage” target=”_blank” title=”Android Market”>Android Market. According to the app store tracker Distimo, Android Market reached this milestone on the New Year’s weekend.
Android Market, which has been part of lot of achievements lately, took only four months to top 400,000 apps from 300,000 in August 2011; clearly showing that there is a lot of developer interest in making apps for the platform.
Few pointers about the current state of Android Market:

The number of applications being depicted by Distimo represents the currently available apps in the Market, not the ones that have been deleted by publishers or by href=”http://google.com/” rel=”homepage” target=”_blank” title=”Google”>Google.
To remind you, Market had also crossed 10 billion app downloads last month.