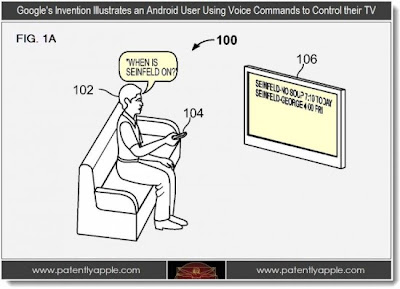 Google Rushed to US Patent and Trademark Office for Patent Application for Google TV remote and/or application. Similar to Apple’s Siri, The new remote will use voice controls associated with Google’s own cloud services. The user will be able to use their Android Phone as the remote to make inquiries about TV shows and the TV will list what’s available as illustrated in our cover graphic. Samsung also announced their latest TV remote with voice controls and a touch pad.

The patent mentions the ability to trigger voice commands using certain phrases, allowing users to channel surf without ever touching the remote. Diving deeper we find descriptions of a cloud-based system that uses the user’s smartphone to decode voice into text, send the information to the cloud to be processed, and then complete a process on the television set.