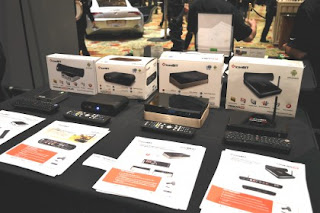 Most of you are familiar with href=”http://www.google.com/tv” rel=”homepage” target=”_blank” title=”Google TV”>Google TV, but I am sure not that many of you have heard of an Android TV. Yes, Android TV. Imagine having the capability of a full blown android experience on your television just by adding a neat little set top box. A Russian based company called IconBit has created just that — a line of set-top boxes that will bring the href=”http://code.google.com/android/” rel=”homepage” target=”_blank” title=”Android”>Android OS to any HDMI compatible television.
We had a chance to meet with the IconBit team at CES and got a rundown on their latest Android endeavors. They have created 4 different boxes that all access the href=”http://www.android.com/market/” rel=”homepage” target=”_blank” title=”Android Market”>Android Market and a couple that come with a gesture controlled remote (think Nintendo Wii). One of the more exciting bits of news was the announcement that all 4 devices will be upgraded to Android 4.0 Ice Cream Sandwich in the near future. All units provide a tablet-like experience on your home television and can be linked up with an external hard drive for storing your favorite media files.
The entry level box, the Toucan Nano, comes equipped with Android 2.3 and is upgradeable to 4.0. The device will sell for $99 (Toucan Plus with remote for $159), and delivers HD video playback of any video file you through at it. Some other features include: The next device in the line-up, the Toucan W, gives you the same functions and features as the Nano, but you gain Wi-Fi ability instead of being hardwired. The Toucan W also adds component out connections. The third box, the XDS7 3D, ups the ante and adds 3D functionality and also provides faster file transfer speeds with the addition of a USB 3.0 port. Also, this box has a hard drive for storing your media files, whether it be audio or video. Some additional specs include: The fourth and final IconBit box is called the XDS1003D and is the creme de la creme of their Android units. Although not much is different on the inside compared to the XDS7, it definitely has a sexier look and comes with a built in cooling fan and a 3.5″ HDD is on board that provides up to 3 TB of storage. No word on when these would make it to the US market other than “sometime in the near future”. It also appears that an Android tablet is in the works according to their display at CES (see picture below), but we were unfortunately unable to confirm anything else about it. I am sure we will be hearing a lot more from this company so stay tuned… I think we may have a demo unit lined up for our testing pleasures.