Update: The plans are for temporary testing purposes, it is not the rollout of new plans. Netflix currently offers only three plans – Basic SD (INR 500), Standard HD (INR 650) and Premium UHD (INR 800).

“We are always looking for ways to make Netflix more enjoyable and accessible. We will be testing different options in select countries where members can, for example, watch Netflix on their mobile device for a lower price and subscribe in shorter increments of time. Not everyone will see these options and we may never roll out these specific plans beyond the tests.” says Netflix Spokesperson.

Netflix, a popular streaming service offering brohure full of movies and series. After entertaining users globally for over years, Netflix made its official entry in India in 2016.  After huge demand, India has become a huge market and they seem to have started developing the content and packs especially for Indian users. According to a popular survey, most of the Indian users want to opt for Netflix subscriptions on mobile devices that too by paying a minimal amount.

Netflix tends to understand the behaviour of Indian users. To tackle the situation, the popular streaming service introduced exclusive new plans for India with a hidden twist.

Rs 65/125/165/200 Plan – The cheapest plan is starting from just Rs 65/- per week and the most expensive is retailing for about INR 260 per month. These allows access to all the content without any restrictions, but the catch is the users will only be able to screen one device at a time, and the quality is limited to HD. Also, the users will only be able to stream content on their mobile devices and Tabs. 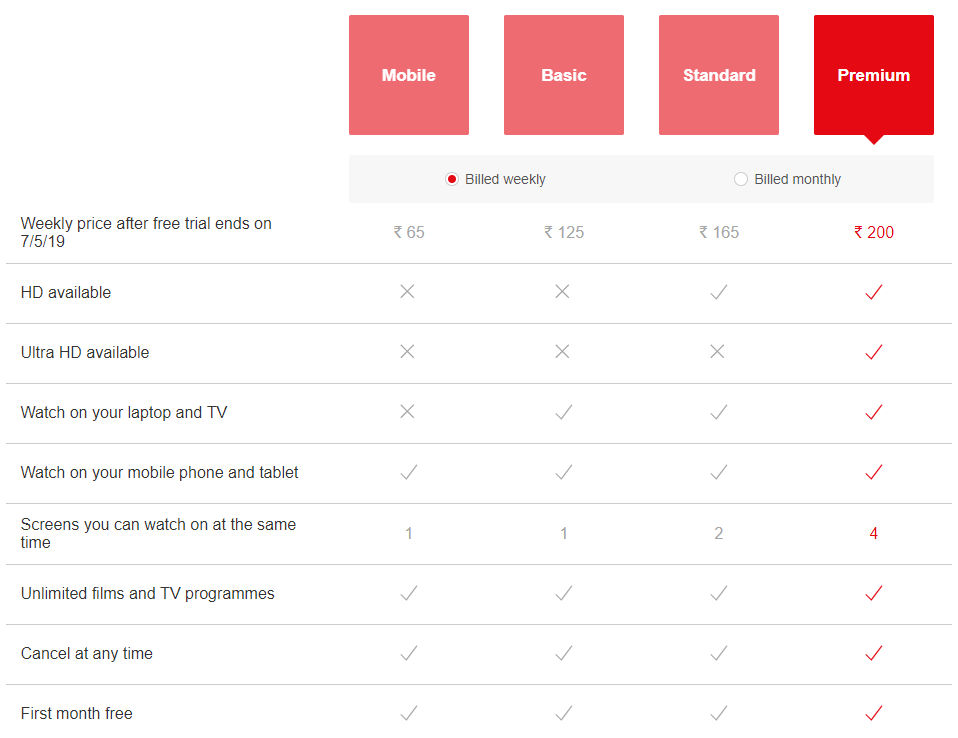 Other Plans launched by Netflix include a Basic Plan which would cost INR 500/- Per Month including HD Quality streaminglimited to one device at a time.

The third plan which is named as Standard Plan will cost the users INR 650/- per month. It includes all the features of the Basic Plan and limits streaming to two devices at a time.

The last and the most expensive plan is the Premium Plan which costs around INR 800/- per month. It offers HD and UHD Streaming upto 4 devices at a time.

Hope these plans match up the needs of the Indian People and Netflix. For any further updates regarding Netflix plans changes remain conncted with us!