GoAndroid
Home News NVIDIA announces 4 New Games for Tegra 3 Devices
NVIDIA powered devices, especially ones with the new Tegra 3 chip, have great specs. They also have optimized software available for them, through the Market or places like the Tegra Zone. When you mix the two together, they really shine.

The new game titles include Golden Arrow THD, Dark Kingdom THD, Eden to GREEEEN THD and Hamilton’s Great Adventure THD. So if you have been waiting to flex your Tegra 3 muscles some more, this flurry of games should keep you busy for quite some time. 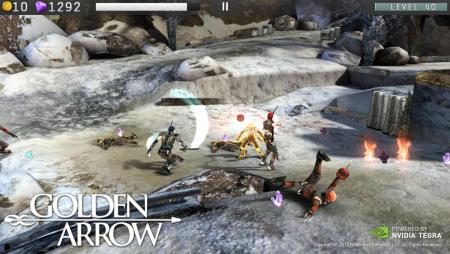 This combat game will be free to play, and there’s co-operative as well as head-to-head gaming. The graphics look beautiful, the environment is rich, and it looks like a really exciting time for all. Expect it sometime this year, with a special version for Tegra 3 devices.

Eden to GREEEEN
This one happens to be a free game, so you might want to save this one for the end of the month. The game is also featuring great graphics and effects, though.

The story revolves around alien robots that have come to take Eden’s resources. Much like Plants vs. Zombies, you have to fight back with the aid of some furious plants.

In this puzzle game, adapted from from Bitsquid’s DirectX 11 engine, you and your sidekick Sasha the bird have to solve puzzles and challenges to work your way through over 60 levels. Tegra 3 scaling optimizations and the engine conversion make this one rival the experience you’d get from the PC version.