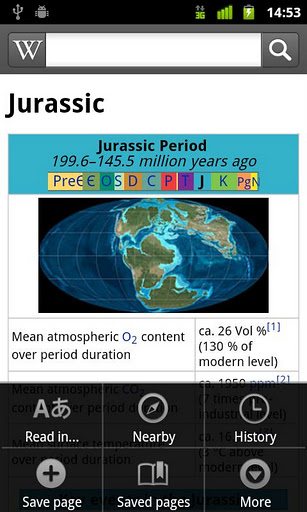 href=”http://www.wikipedia.org/” rel=”homepage” target=”_blank” title=”Wikipedia”>Wikipedia fanatics have long had to rely on a third party service to browse the user edited encyclopedia natively on their Android smartphones, but just as the knowledge bank shutters its site to protest SOPA the official app has hit the href=”http://www.android.com/market/” rel=”homepage” target=”_blank” title=”Android Market”>Android Market. The app has several key features including the ability to save an article for offline reading and search for articles based on a user’s location in the world. Now when visiting href=”http://maps.google.com/maps?ll=38.8951111111,-77.0366666667&spn=0.1,0.1&q=38.8951111111,-77.0366666667%20(Washington%2C%20D.C.)&t=h” rel=”geolocation” target=”_blank” title=”Washington, D.C.”>Washington, DC to deliver letters to congress urging lawmakers to vote ‘nay’ for SOPA and PIPA, the Wiki app will offer knowledge-seekers results that include nearby monuments and historical information. We’ll still need some time to determine how the official offering stacks up to third-party alternatives, but at first glance the native reader looks as good as any.
Android Market Link: Wikipedia