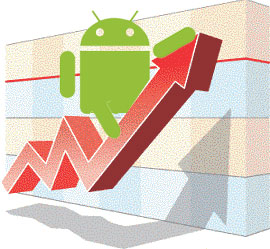 href=”http://google.com/” rel=”homepage” target=”_blank” title=”Google”>Google’s dropped some numbers in their Q4 financial results conference call as they often do. This time, we learn that 250 million people around the world are using Android handsets. It was only a few months ago that they reported a figure of 200 million. Those 250 million people have downloaded a combined 11 billion items in the href=”http://market.android.com/” rel=”homepage” target=”_blank” title=”Android Market”>Android market. They also released some figures regarding Google+. They now have over 90 million users and 54 million are active each and every day. Their signup numbers doubled in just three months and they should be gaining more steam in 2012. Pretty encouraging numbers, I’d say. Google also released their financial figures for Q4 earlier today.