GoAndroid
Home News 2-click Windows root and unlock method developed for the Galaxy Nexus
As far as we’re concerned, if you went out and bought a href=”http://www.samsung.com/” rel=”homepage” target=”_blank” title=”Samsung Group”>Samsung Galaxy Nexus on launch day, you have a responsibility to unlock that bootloader, root Android and get cracking with some custom mods and ROMs. Even though the process isn’t terribly difficult, there are a good number of steps and checks, and not everyone is up for the challenge. Those of you who have been holding off for an easier method can thank “WugFresh” at GalaxyNexusForum.com, who’s developed an easy href=”http://www.microsoft.com/WINDOWS” rel=”homepage” target=”_blank” title=”Windows”>Windows application that automates every step of the unlock process on Windows. 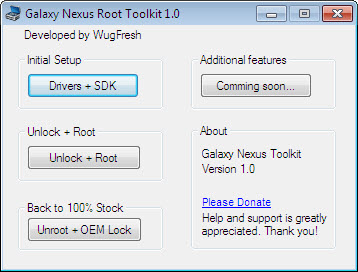 To begin, set your Verizon Galaxy Nexus (the GSM version isn’t supported yet) into USB debugging mode, then plug it into your computer. Run the Gnex Root Toolkit href=”http://en.wikipedia.org/wiki/EXE” rel=”wikipedia” target=”_blank” title=”EXE”>EXE file, then click on “Drivers+ SDK”. This will automatically install the href=”http://code.google.com/android/” rel=”homepage” target=”_blank” title=”Android”>Android SDK and the relevant extra files. Click on “Unlock + Root”, and the tool will restart your Galaxy Nexus in bootloader mode, unlock the bootloader (which wipes your device, by the way) and install the Superuser APK. Restart your phone and you’ve got a shiny, clean version of Android with root permissions, no command lines necessary.
There’s also an option for returning your phone to its factory stock condition, erasing all user data and root permissions. This could be handy for those who are selling or returning their phones. Don’t judge too harshly, died-in-the-wool hackers – everybody’s got to start somewhere. I’ll be sending this along to my dad, who bought a Galaxy Nexus on my advice… with the stipulation that all bets are off, naturally. Whatsapp finally Introduces its Desktop App for Windows and Mac Turn your Windows 7 desktop into an Ice Cream Sandwich dream