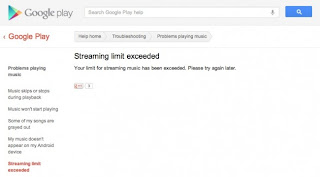 A fellow Google Music user was recently met with a message that they had “Streaming Limit Exceeded,” with the only solution available to try again later. But Now According an official response its clarified now that there is indeed a limit to how much bandwidth you can stream in one day you’re your Google (Play) Music account. Google, however, has declined to reveal the cap, but does claim that it has been set at a very high threshold so that most listeners will never encounter it.