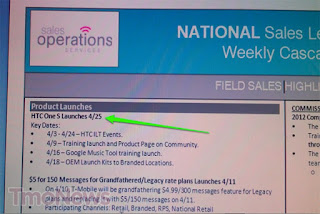 In February T-Mobile confirmed that HTC One S is coming to the network, but after that nothing happened. But now, TMoNews has confirmed that T-Mobile employees have begun training for the upcoming launch of the device and it appears that all signs point to a launch on April 25th. The HTC One S features a 4.3-inch qHD Super AMOLED touch screen which sports 540 x 960 resolution, a 1.5 GHz, dual core Qualcomm Snapdragon S4 processor, a thin 8.9mm design, and Andrid 4.0 Ice Cream Sandwich. HTC One S is already available in Europe (UK) and India.