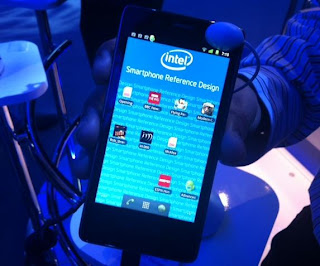 Last month, we heard a lot out of Intel about its interest in getting back into the smartphone game. While Intel chips saw use in the days of Windows Mobile, the most recent generations of smartphones have favored ARM processors. We heard about a reference design Intel had put together in hopes of attracting manufacturer interest in the platform, and had the opportunity to see a render of the device. With the CES now underway, Intel is showing-off this smartphone effort, giving us out first look at an Intel Android in action.

This hardware is never meant for retail shelves, but we’re still interested in it as a jumping-off point. Decisions Intel has made about its chipset will continue to affect smartphones using it for some time to come, so it’s nice to have a plain base model to compare those later handsets against.

This particular design features a just-over-four-inch display, an eight-megapixel main camera with 1.3-megapixel front-facer, and supports HDMI-out. There’s also NFC support, which we’ll hopefully see in other phones based on Intel’s chips.