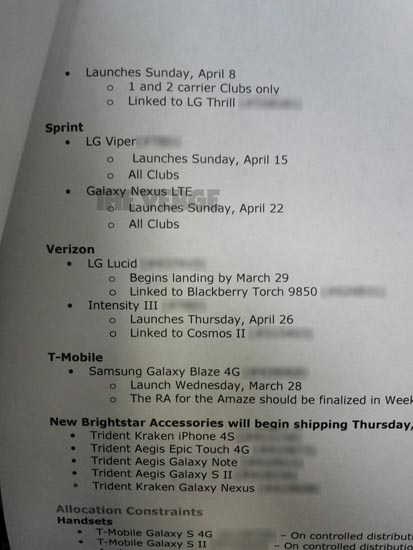 According to the folks over at The Verge Sprint Galaxy Nexus LTE may Release on April 22nd as they have got leaked document, with the LG Viper. As Sprint has officially announced its one of the first 4G LTE capable handsets, the Samsung Galaxy Nexus, but we’re not hearing about an actual release date just yet. However, today’s rumor does not line up with the previous one, which claimed that the Sprint Galaxy Nexus release date was set for April 15.

So will we finally see the Sprint Galaxy Nexus on store shelves once April 22nd rolls around? It’s certainly a possibility, as Sprint has been known to release new phones on Sundays in the past, and the dates for some of the other devices on this list (Lucid and Galaxy S Blaze 4G) are accurate. But there is nothing official for now.
Via The Verge