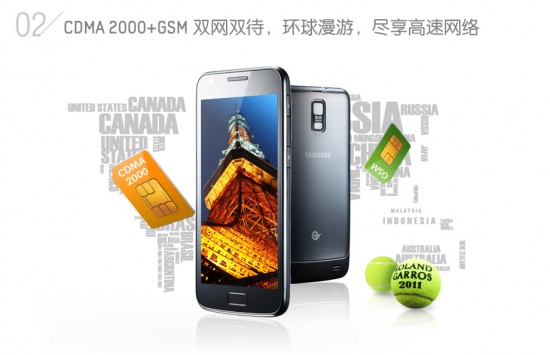 After revealing a duo of dual-SIM handsets yesterday in the form of the Galaxy Y Duos and Galaxy Y Pro Duos, Samsung will add to their lineup of handsets with expanded radio capabilities. A new variation on the Samsung Galaxy S II is headed to China and will support both GSM and CDMA2000. The phone is known as — you guessed it — the Samsung Galaxy S II Duos. The specs largely mirror previous GS2 iterations and include a 1.2GHz dual-core CPU, 4.52-inch Super AMOLED Plus display, and 8MP camera with 1080p video recording. The phone ships with Android 2.3 but should be in line for an Ice Cream Sandwich update along with other members of the Galaxy S II roster. The world phone will be available from China Telecom.
[Samsung via GSMArena]