GoAndroid
Home Sony Sony Unveils the SmartWatch, Shipping With Xperia S Later This Year
Smart watches are all the rage these days, apparently, as yet another player has come to the table with one… sort of. Sony has introduced the SmartWatch and has announced that the device will ship with the Xperia S later this quarter for about 100. 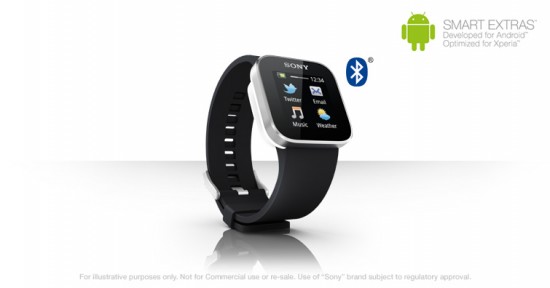 – the joint partnership between Sony and Ericsson whose phone and mobile division will soon be swallowed by Sony – had the LiveView accessory and while it was a great idea they didn’t really execute the way I thought they would have.
Sony’s giving it another shot here, though. We’re looking at a 1.3 inch OLED (read: WIN!) screen which pairs to your phone via Bluetooth and will show you incoming calls, texts, emails and more.
It’s important for devices like these to be extensive so we’re happy to know that Sony will be making an SDK for developers and will support application downloads from the href=”http://www.android.com/market/” rel=”homepage” target=”_blank” title=”Android Market”>Android market. Head to their site for more information.