GoAndroid
Home News Hundreds Lineup To Buy Meizu MX as It launches in China and... 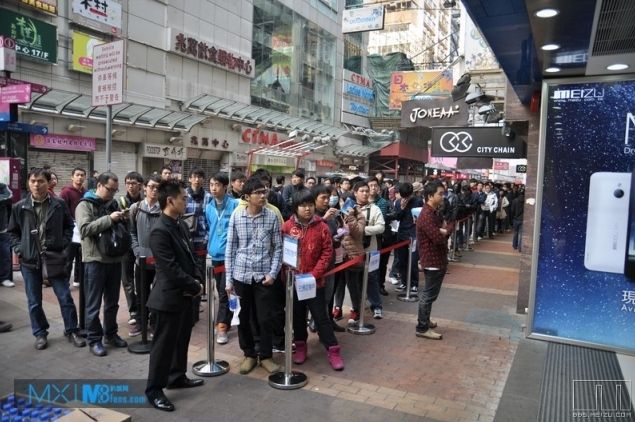 New Year’s Day may seem like a vacation for most technology enthusiasts, but not href=”http://en.meizu.com/” rel=”homepage” target=”_blank” title=”Meizu”>Meizu fans. Today, the dual-core Meizu MX smartphone launched in Hong Kong and China, and plenty of excited buyers showed up with their pre-order slips in hand. Meizu Me estimates that over 900 people stood in line at Meizu’s new Hong Kong shop to purchase the 2,999 yuan device, which has reportedly been tweaked since early reviews, with “a anti-fingerprint coating to the camera lens, easier to use hardware buttons, improved aesthetics of the internal circuitry along with improvements in overall build quality.” It doesn’t come with Android 4.0, though, but the company promises an upgrade for both the MX and M9 later this year. Speaking of the older Meizu M9, it just got a price drop to 1,699 yuan to make room for its successor. The official Meizu forums have plenty of pictures of the crowds, and an additional tidbit of news: Meizu CEO Jack Wong suggests that the quad-core version of the Meizu MX might not be ready until May of next this year.
Via: The Verge
Image credit: M8fans