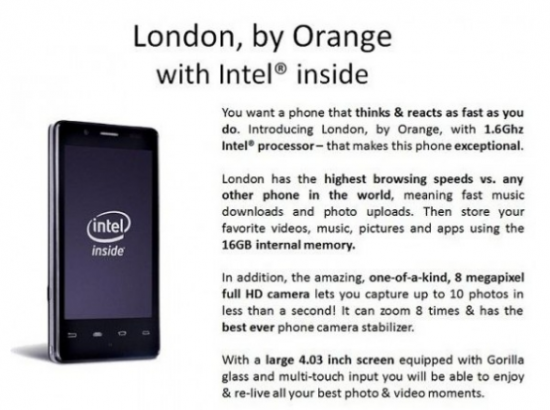 Simon Hardy, a reader over at Coolsmartphone found himself presented with this image for completing a market research survey for Orange UK. Orange is reportedly conducting a bit of market research on their latest phone to bare a city-based name.

Following devices such as the San Francisco and Monte Carlo, the Orange London is said to get a major boost in the specs department courtesy of Intel. What sets this apart from previous Orange efforts are the specs. Fast Intel processor, 16GB internal storage, 8MP camera with HD capabilities and the “best ever” phone camera stabilizer.Gorilla Glass over a 4-inch screen and what appears to be a front facing camera completes the spec list.
Orange has typically gone with a second-tier manufacturer to provide the devices that are rebranded under their own banner. Past entries have come from ZTE and Huawei. It isn’t known who would make the London, but Lenovo isn’t out of the question — a partnership was announced between the mobile maker and Intel back at CES.

With Mobile World Congress right around the corner, we expect to see quite a few new Intel designs. It could all be a big hoax.