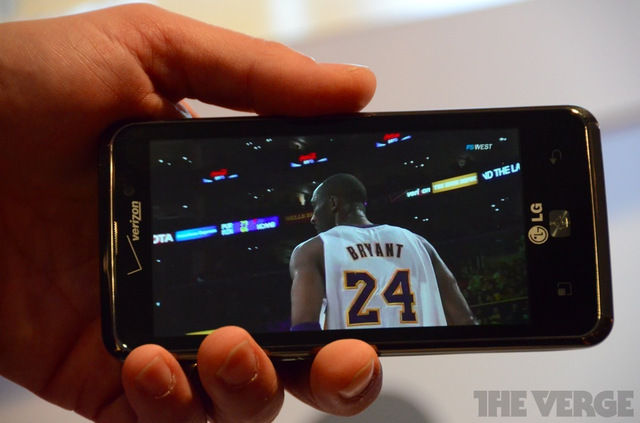 href=”http://www.lg.com/” rel=”homepage” target=”_blank” title=”LG Corp.”>LG’s True HD IPS display is making its way to href=”http://www.verizon.com/” rel=”homepage” target=”_blank” title=”Verizon Communications”>Verizon, to do battle with the Galaxy Nexus. The 4.5-inch Spectrum was just introduced at LG’s CES 2012 press event, where its 720p resolution, 326ppi pixel density, and 1.5GHz dual-core processor got their chance to shine. Having spent some time playing with it, we can say the display is every bit as delightful as LG claims it is, with the company offering us a handheld microscope to take a close look at the RGB stripe subpixel arrangement — any chance to poke holes in href=”http://www.samsung.com/” rel=”homepage” target=”_blank” title=”Samsung Group”>Samsung’s armor, eh?

Regrettably, the Spectrum will ship (on January 19th for $199.99) with just href=”http://code.google.com/android/” rel=”homepage” target=”_blank” title=”Android”>Android 2.3 on board, whereas we’d really like to see phone makers move to Android 4.0 full time from here on out. As powerful as the Spectrum may be, we still came across a few stumbles in performance, particularly when using the pinch-to-zoom gesture to bring in an overview of all seven homescreens. That’s not exactly awesome, and neither is LG’s Android skin.

For a 4.5-inch phone, the Spectrum has pretty good ergonomics; it fits comfortably in my hand and can be operated without too much effort. Its construction quality feels light years ahead of the plastic-rich Optimus LTE on sale in Korea, a spec sibling of the Spectrum. Its rear cover is still made out of plastic, but it’s smooth rather than textured and offers a better tactile feel.