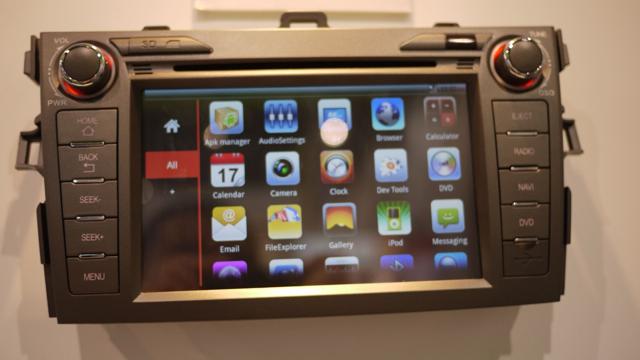 The automotive segment of href=”http://www.cesweb.org/” rel=”homepage” target=”_blank” title=”Consumer Electronics Show”>CES does deliver its fair share of interesting stuff to look at, and the RoadRover Android-powered dashboard is certainly something that caught our eye. So far, we do know that the company caters to different vehicle makes and models already such as the Audi A3, href=”http://www.nissanusa.com/altima/” rel=”homepage” target=”_blank” title=”Nissan Altima”>Nissan Altima, Peugeot 407/408, Toyota Tundra, Chevrolet Captiva, Ford Fiesta and KIA Sportage among others. The RoadRover system basically allows you to synchronize your data among Android-powered devices such as smartphones and tablets, not to mention opening up the world of running thousands of apps from the href=”http://www.android.com/market/” rel=”homepage” target=”_blank” title=”Android Market”>Android Market right in the comfort of your vehicle. Of course, we do not recommend playing href=”http://www.rovio.com/index.php?page=angry-birds” rel=”homepage” target=”_blank” title=”Angry Birds”>Angry Birds while you are driving, but to be able to access your Facebook status updates as well as tweets in the car itself is a novel idea, although it is definitely not a killer function to begin with.
External USB camera support is also thrown into the mix, letting you take snapshots of your journey in real-time and uploading them to Facebook or a link to Twitter right there and then – again, with a connected smartphone you can already do that, making RoadRover’s attempt to be more of an add-on than main meal. I guess the only reason to get this would be for its navigation capabilities – anything else on top of that is a bonus.