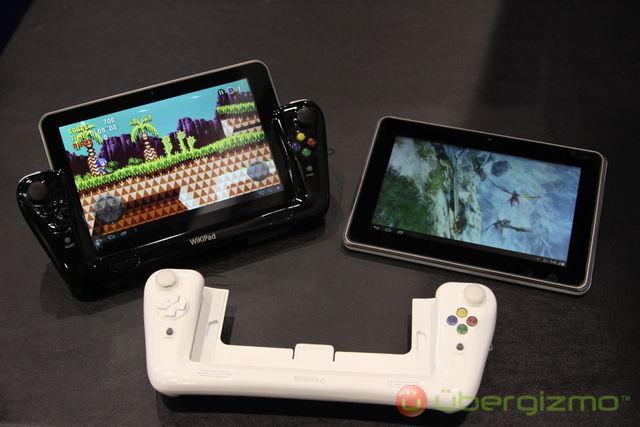 While we took a gander at the rather high end Razer Fiona Concept yesterday, here is something else that might appeal to a different group of gamers – the Wikipad. I admit it, when I first heard of its name, I thought it was some sort of educational, informative tablet, but my guesses are as inaccurate as href=”http://arshavin.eu/en/” rel=”homepage” target=”_blank” title=”Andrei Arshavin”>Andrei Arshavin in an href=”http://www.arsenal.com/” rel=”homepage” target=”_blank” title=”Arsenal F.C.”>Arsenal jersey (I’m a Gunners fan), as the Wikipad turns out to be a gaming device concept. Boasting a touchscreen display alongside dual-analog gaming controls, it also comes with a glasses-free 3D display – could this be some sort of weird amalgamation between the Nintendo 3DS and the PS Vita?
With an 8″ size, it runs on Android 4.0 Ice Cream Sandwich that failed to impress in terms of speed, which is fair considering this is still a prototype, so the final version had better work out its kinks before it is released to the masses. There was no way to try out the controls on this where gaming is concerned, since no functional games were available just yet, and we just need to remain patient until the folks behind the Wikipad polish this up into the real deal.